Making a Difference: Teens team up for Christmas 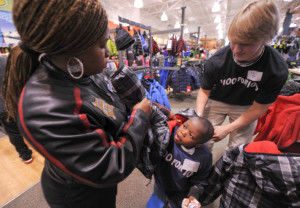 Jaquan Williams tries on a coat with help from his mother, Crystal Moyd, and John Tyson, a junior at St. Christopher’s School, during the RVA $100 for 100 shopping trip to Dick’s Sporting Goods at Short Pump Town Center. Photo: Clement Britt. http://tinyurl.com/qgb2tvn

High school students in business attire aren’t quite elves, but they sure do the job.

A group of local private school students have been quietly pitching the community on helping others, and it’s working.

The project, RVA $100 for 100, sends teams of students at several local schools to solicit contributions to make childrens’ Christmases better.

“The joy and happiness feels so much more than after a normal community service project, because we made it happen,” Penn Mayhew, captain of the $100 for 100 team at Collegiate School, wrote in an email. “We went out and pitched companies and raised the money for the event to be able to happen. The rewarding feeling of joy and happiness is unbelievable.”

Five years ago, seven students at St. Christopher’s School raised about $11,500 in the program’s inaugural run.

St. Catherine’s joined in 2010. Last year Collegiate got involved as well. The project’s website sets it up as a competition among teams.

The students identify prospects in the community — small businesses, individuals and other potential donors — then put together a PowerPoint presentation to use as a pitch book. Between September and Thanksgiving, they make their pitch, dressed professionally and hitting conference rooms around the area.

The amount raised has increased every year. Last year it brought in about $38,000. This year it raised about $51,500, helping about 450 children. The students go shopping with the beneficiaries, helping them get essentials and a few extras to ensure they have a good Christmas.

“There is literally almost a 100 percent success rate,” said William Tyson. His son and his son’s friends helped start the program. Tyson has remained involved. The pitch really reaches people, he said.

“Folks just opened up and said, ‘Gosh what a great thing,’ “ Tyson said.

Some of the donors ended up being recruited into the program, he said.

Tyson first encountered such a project on a business trip in Massachusetts.

Soon after, his son, then a St. Christopher’s sophomore, approached him about a community service project he needed to do. He said he wanted to do something different, entrepreneurial, so the program seemed like a good fit.

The company he worked for, BB&T, also started supporting the program, and has kept with it.

Mayhew became involved after he received an errant email message. He thinks his family was left on the email list because his brother had gone to St. Christopher’s. He asked if he could join, even though Collegiate didn’t have a team at the time. Soon after, he and Tyson worked to create a Collegiate team.

Tyson said it’s also important that the students don’t just raise money and send it on, they help with the giving end of things, as well.

The group contacts youth organizations in the community to find those in need. They help those from 5 to 18 years old, he said.

Mayhew said his favorite part is shopping with the recipients.

“Most definitely shopping with the kids, because you are able to put a face to the nomination and you can feel the amount of joy and how thankful they are of what we did,” he wrote in an email. “We were able to give them the Christmas that they might not have been able to receive.”

He had done plenty of community service, but found this to be different.

“I thought I had a good understanding of what it was going to feel like,” he said. “The feeling after seeing the children go through the shopping line at Dick’s Sporting Goods was like nothing you can imagine.”